Vikurkirkja, the church of the village Vik, the southernmost village in Iceland located on the main ring road. Vik lies directly south of the Katla volcano which has not erupted since 1918.

Katla if erupted could melt enough ice to trigger a flash flood large enough to wipe out the town. Víkurkirkja is located high on a hill and is believed to be the only building that would survive such a flood. 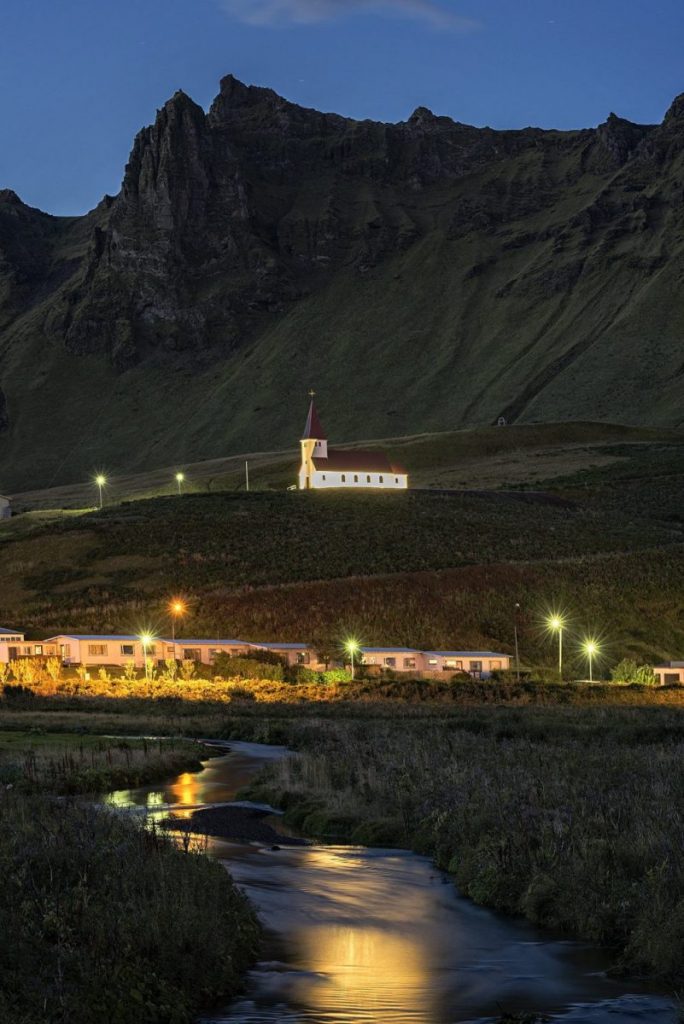 This is a shot I am very lucky to get. Let me tell you why. After shooting the famous sea stacks ‘Reynisdrangar’ from the Black Sand Beach near the village Vik we drove into Vik to fuel our stomachs and the car. We noticed the church as we entered the village. The mountains as the backdrop with the yellow golden light from the sun as the sun was setting. We could not afford to miss getting fuel and food to stock up since everything closes really soon. We hoped the light remained until we got done. But unfortunately the sky became overcast. Like we didn’t have bad weather our entire trip already. Nonetheless we made our way down to the shore and shot the sea stacks once again but from a different angle.

I constantly turned around and looked at the church hoping for some good light. With bluehour kicking, and the sea stacks looking dull, I took my last few shots and started to head back with occasionally pausing to get shots of the church (the ‘something is better than nothing’ situation). Just before reaching the car I came across this little wooden bridge. There was a stream flowing with the lights of the village and church reflecting on it. That was the shot. A 30 seconds exposure is all I could do as I didn’t have my cable release. Heading to the car and back was not an option. The surrounding was already dark and we had to head to our next camping spot. Took the 30 seconds shot with a deep blue sky, an over exposed church and a black foreground and background. I never looked at that image again.

Five months down the line I opened the picture and decided to work on it. I was amazed with how much I could recover in terms of shadows and details. Guess that’s the power if the high dynamic range of the Nikon D810.

If you’d like to know more about our trip, visit www.dubaitoiceland.com